I finally found a letter I wrote to WR citizens a few years back. And I do quote former mayor Steve Burkholder.

It has been my honor to serve you as a member of the Wheat Ridge City Council and now as your Mayor since 1995. I have also had the opportunity to work for you thorough various town meetings, neighborhood meetings, temporary committees, testifying at the state legislature, the Colorado Municipal League, DRCOG, running for the state Senate in 1998 and now through the Metro Mayors’ Caucus. It is with this perspective of active participation that I wish to share my thoughts about keeping local elections nonpartisan.

The strength of city government in Colorado is that municipal elections are nonpartisan; that is, no political parties are involved. We are already seeing the negative effects of the partisan candidates and both major political parties attacking each other in the media. Rather than talking about issues and the virtues of the candidate, each sling mud at one another. And it’s only September!!

Local control must remain local. In order to have the most effective, efficient and responsible municipal government, elections in Colorado cities and towns must remain nonpartisan in order to better serve their respective communities. On a regular basis, we might have to address a barking dog, a pothole in the street or improve an existing park, but we do not need one political party or another supporting the barking dog or the pothole!! Local government, which is closest to the people, deals with real day-to-day issues.

Mayor Steve Burkholder of Lakewood writes “In John Avlon’s book, ‘Independent Nation’, he stresses that centrists can change American politics. Avlon says that Americans believe in fairness, and the majority are frustrated by extreme points of view. At a time when political debate is too often dominated by the far left and the far right, centrists cut an independent path between the extremes, putting patriotism before partisanship and the national interest before special interests.”

I fully support Mayor Burkholder’s and John Avlon’s position. We must continue to encourage people who run for local public office to do so in the spirit of common sense and community service and not to use their efforts to promote a partisan agenda. Good public policy is created by a lot of listening to the community, considering the facts and weighing the short-term and long-term consequences of any decision. Will everyone be happy? Probably not! But the decision was made in the best interests of the community as a whole. This is the basis of representative democracy, which is the foundation of our country.

Mayor Burkholder and I have observed that a majority of citizens are fed up with politics as usual. It is time that we return to doing what’s right for our community with a common sense approach rather than measuring issues by an ideological checklist.

For the most part, Wheat Ridge has had dedicated individuals whose only purpose for running in a nonpartisan race for Mayor or City Council was to serve the community and to make it a better place to live, work and play. I would hope that we continue the tradition in Wheat Ridge of keeping our elections nonpartisan. 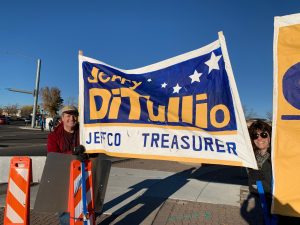